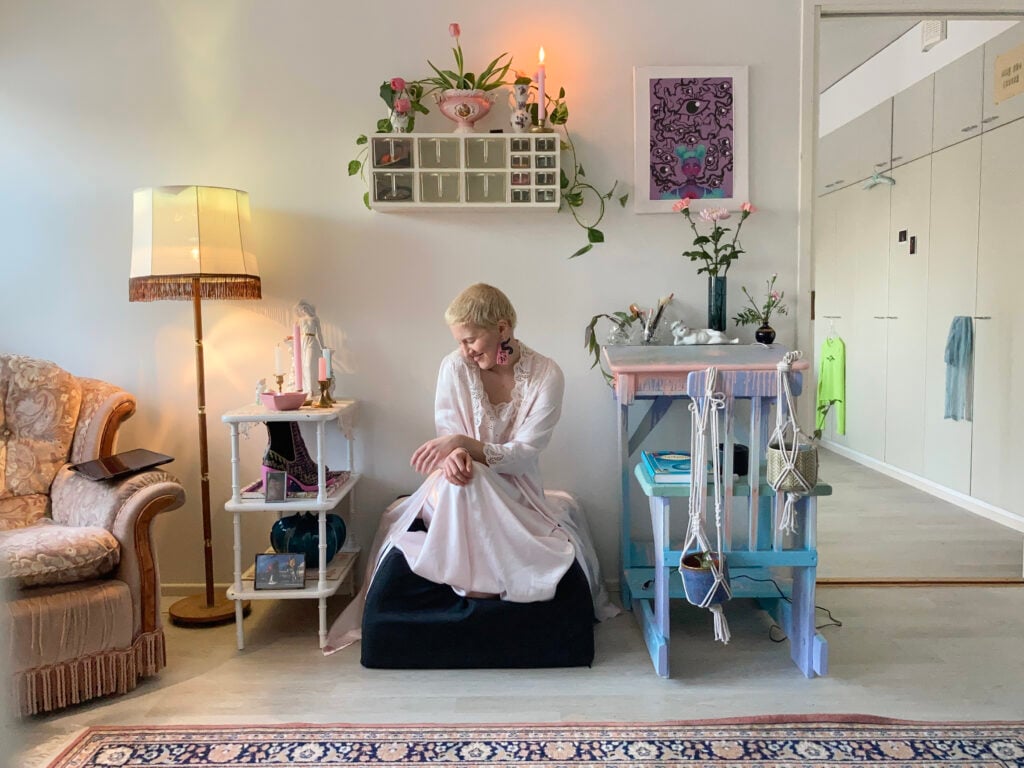 Our Cultural Personality of the week is Anna-Mari or Ansku Nousiainen, who describes herself in her Instagram bio as: “Failed film-maker, mediocre artist and soon-to-become bad tattoo artist.” Ansku confirms she is all that but also a lot more. At least, a loyal hype girl, pathetic softie, a bit tough, but deep down a really sensitive soul.

Ansku dreamt of becoming an artist since primary school, but her career in film happened accidentally. After finishing upper secondary school, the doors to the art schools did not open and, in panic, Ansku applied to any further education programme that mentioned the word culture or media. Sitting at the entrance interview for Salpaus Further Education, Ansku was wondering why on earth they were asking strange questions about XLR cables and connections and tried to steer the interview towards comics. Eventually the interviewers asked, “You do know this is an audio-visual media programme?”.

Ansku had thought she had applied to the graphic design programme, so thinking on her feet, quickly replied, “Yes, I LOVE cinema!”

Miraculously, Ansku was accepted and was later able to study film and work in the industry. Throughout her studies, however, Ansku also studied and worked with art and insisted on calling herself an artist.

Today, Ansku makes art across disciplines and her career is currently in transition. Ansku has moved from film more towards festival work, and in her artistic work she has expanded into photography, video and installations as well as 3D and audio works. Stories, not just showing them but also telling them, are at the core of Ansku’s work.

This spring, Ansku is mostly focusing on her role as the artistic director of the Oulu Music Video Festival, which brings all her professional interests together. Ansku has always loved music videos and is a complete “music video freak”. When she realised she, too, could be making music videos, there was no turning back. Ansku started attending the Oulu Music Video Festival (OMVF) first as a video maker and, inspired by the event, she launched a small Musavideorama music video event in Tampere together with Anna Alkiomaa. Recently, OMVF was looking for a new artistic director, Jaakko Mattila, who was leaving the role, suggested to Ansku that she should apply. Ansku has been working as the artistic director of OMVF since 2019.

You have just moved to Oulu from Helsinki. Tell us more! How did you come to that decision? How does it feel now, to live in Oulu?

Many people have asked me “Why would anyone move from Helsinki to Oulu?”. I could write an essay or a short story about it, but I think I’ll just settle for a short “Why not?”. Helsinki was cold and I was longing for something else. I have managed to travel to Oulu once a month for an entire autumn and winter, for one week at a time, so I thought Oulu could could just as well be my home and I could travel from here. I was nervous about the move mainly because my friends mostly live in the south, but people did support my decision! I have always travelled a lot all over Finland, so this was not as radical a choice as it may sound. My mum agreed with my decision and said “It’s great that things are happening elsewhere as well, not just in Helsinki!” My home has always been critical of Helsinki-centredness and I guess that has rubbed off on me.

My relationship with Oulu was purely the result of the music video festival – first as a visitor, then getting more involved with the event and now finally as the artistic director. I have no family here, and before the festival, I didn’t know anyone in Oulu. Through the festival, I had quickly built a very close circle of people and relationships that are important to me. I called it my music video family, and I started spending more and more time here outside my work as well. Summer 2021 was probably the turning point when my thoughts came together. Elektorni, festivals and events, perfect rollerblading routes and bright summer nights completely charmed me. Oulu was flirting with me like nobody or no other place has ever done before!

I must say that the campaign to get me to Oulu was persistent but subtle (these people are professionals after all!) and eventually very successful. So here I am! As my friend Vilma said: “There must be something very special about Oulu for you of all people to move here!”

What are you up to these days? How do you spend your spare time?

I’m great! I moved here about a month ago, so I’ve mainly been tidying up my place, nest building (and building my doll’s house) and hanging around vintage markets (Oulu has the best vintage markets, I have found the best pyjamas, mesh tops, china and homeware here). The first two weeks I spent just unpacking and decorating my place, and the pastel colour scheme is almost ready. It’s time to move my focus to day-to-day life, and at this time of the year this includes writing grant applications.

I was hoping that after unpacking all my stuff I would be just organising my china, lying in bed and drinking endless cups of coffee in the morning. And that’s precisely what I’ve done all February! I’ve found it difficult to read for the past couple of years, but since I moved, I’ve found myself with a book in my hand every day!

This month’s book and other spring-time tips:

And so as not to sound more intellectual than I am, I have also been obsessing about the reality TV show Too Hot To Handle. To the point that I’ve found out which of the couples are still together… I never used to watch reality TV but then I came across Fboy Island on HBO and I was hooked!

I am also trying to rest more this spring, before the summer’s hectic festival season begins.

Climate change as a term is quite dramatic and of course we associate it with the state of our environment and it makes us worry about the future. I have long been a huge fan of domestic travel and I think that surprisingly few people in Finland have travelled widely in their own country. I really want to encourage everyone to embrace the idea of cultural climate change, and if there was anything positive about the coronavirus pandemic, I would hope it is people discovering domestic travel. For example, the Bättre Folk festival draws wide audiences from outside Oulu, which only goes to show that distance is not an issue. After all, people travel abroad to go to festivals.

As a term alone, climate change is shocking in a negative sense while cultural climate change to me means openness, kindness, collaboration and lack of prejudice.

What is it like to work in Northern Finland? How do you find Oulu at this present time?

I think Oulu is a perfect size to work (and to live!). You can make things happen and people seem very open to cooperation and new experiences.

I am constantly positively surprised how I don’t have to spend all day commuting and dealing with some complicated issue, as was the case in Helsinki. I love it that getting about without a car is so easy and quick. The city centre is very compact and I absolutely love that about Oulu! As a festival organiser (and visitor!) this is a real positive – people can easily attend several events in one day and with effective marketing, the pre and post-festival parties can also be squeezed in the same night!

Oulu is like a big park, in a good way. The woods and water are never far away. I am impressed by how many accessible, non-commercial spaces there are in the city centre where people can meet up and spend time.

For most of my career I have worked in Northern Finland during the pandemic, which of course has had an effect on what working in the cultural and festival sector has been like for me. I would like to see more cooperation between event organisers in events marketing (we should have our own Oulu Hypend!). I think there are a lot more young party- and festival-goers that we are not yet reaching. It is also interesting how easy it is to travel from here to Sweden and Norway overland! It will be exciting to see how the connections between the neighbouring countries are utilised in the Capital of Culture project.

What will Oulu look and feel like in 2026? How do you think the Capital of Culture title will impact Northern Finland?

It feels a bit wild to think that far ahead at the moment! I hope that Oulu presents itself as the lovely green city that it is, where the sun is shining and people are busy going to events. I hope to see an even livelier and more accessible, diverse and open-minded urban culture.

I would like to be shocked about how many of my friends have never been to Oulu, but then again, before the music video festival, neither had I. But that shows we should never underestimate the power of culture! I believe that the Capital of Culture title will encourage us to build new networks, venture into unknown territories and organise even more and more diverse events.

I also think that the impact will be seen in Oulu residents learning to appreciate their city and the region more, and in that the appeal of Oulu will be noticed further afield that in Northern Finland alone.