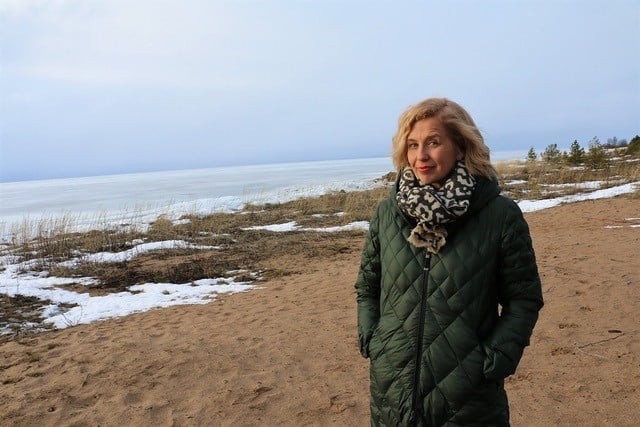 Merja Aakko, 50, is a full-time screenwriter, former journalist, living in Oulu. She has written the manuscript for the famous Finnish television program Kaikki synnit with her writing partner Mika Ronkainen. The third season of the drama is under preparation at the moment.

How does your life look like and feel now, during these exceptional times?

“This autumn I have kept a firm hold of those good things that I have managed to. Culture and encounters between people carry through the darkness. With the introduction of the new restrictions, I find joy in streaming services and novels even more than before. I go skiing and do long walks and meet the people closest to me. I also intend to knock on the doors of galleries, in case they would be able to stay open.”

“The daily city life is gloomy due to covid, just like everywhere else, life is small and quiet. Then again, the relatively small size of Oulu is an advantage in this situation, as the difference to normal is not as big as in metropolitan cities. I take happiness in things such as that a Christmas tree appeared in front of the City Hall, the bicycle paths are plowed from snow and the illumination of the city theater was changed to orange as a symbol of support against violence on girls and women. I am sad that the cultural institutions that have taken appropriate measures against covid, such as the Oulu Theater, the cinemas, and the Oulu Symphony Orchestra, now had to close their doors. Despite the sadness, it is the correct decision. I am looking forward to getting back to enjoy the cultural life more than looking forward to Christmas. I especially miss live concerts and haven’t attended a single club gig during the pandemic.”

“It will certainly be an original year. Cultural operators here have inventiveness, courage and professionalism, which can save the entire region from mental death. I can for example party and dance in Oulu at 9 AM, if I feel like it. The city’s culture field must now fight against dementors, as incredibly short-sighted proposals, such as cutting the funding for the city theater, are being made. The fields of arts and culture need more energy — money and care. The vitality of culture makes the city more attractive.”