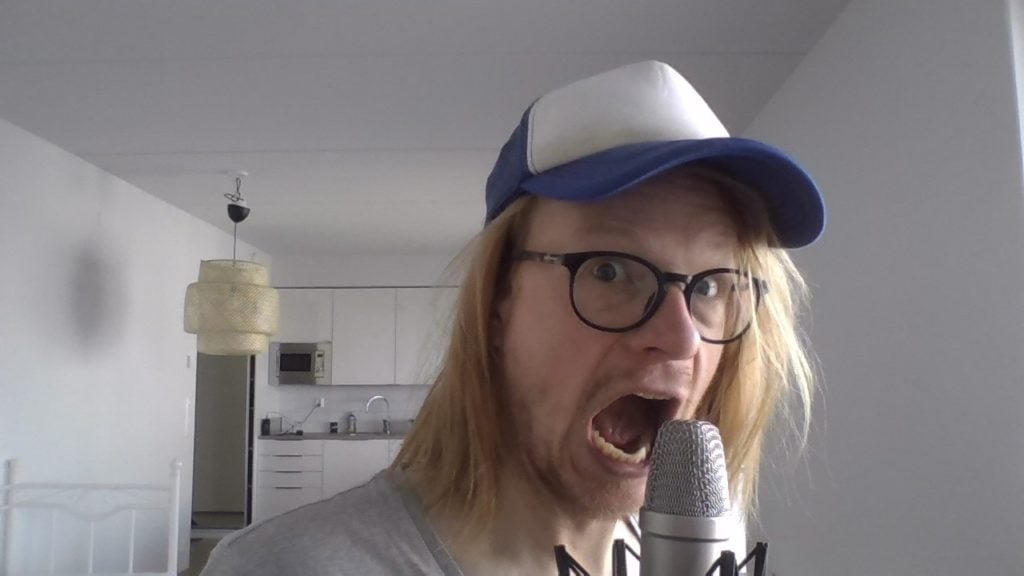 I’m Joose Mikkonen, 43 years old. I’m an actor at Oulu Theatre and also working on my graduate degree at Oulu University of Applied Sciences. I also try to take part in all kinds of activities alongside my job, studies, and overall life. Lately I’ve been enthusiastic about stage poetry and reading audiobooks.

Many things have turned upside-down due to corona. My feeling of basic security has been shaking for some time now in different ways. Thinking about my own job 15 years ago, there were no doubts about the job’s permanence. Nowadays that’s all there is, and corona hasn’t exactly helped with this. On the other hand, we have to live with the situation now, and questioning your own status does have some positives. In the end it’s all about a choice between futile worrying and readjustment, evolution. Maybe this choice is the only really free choice one ever gets.

In practice, the situation has changed ways of working. We practice for fall’s premiers via remote connections. This brings its own problems and possibilities; between these, I choose possibilities. One can act this way as well, and surely some parts of how we do things in this situation carries on with us after corona. Of course, a stranger might find it weird seeing me, headphones on, rehearsing at the yard. If you see someone shouting “Get out of my house, you Babylonian whore!” on the street, that’s just me working.

My idea of theatre has changed a lot. Streamed theatre has showed that theatre in itself might not be enough content for a good experience; a good experience has something more, like being in a crowd. Take for example ice hockey; watching a match live includes walking around the rink, eating sausages, and greeting mutuals. Secondly, highlighting the heavy sides of life isn’t interesting at the moment, since by default everyone is miserable enough right now, so why would they watch actors portraying miserability? I would never have believed I’d say this, but maybe theatre’s big mission after corona is providing a sort of escapism. A short break from day-to-day life could have great value. Of course I still think theatre could have so much to offer to society and individual, making use of for example applied art. It offers a good way to take look at actions without first assigning it a value. Art might have different meaning during different times, and times have changed once again.

A year from now on… I hope I’ve managed to take my ideas towards becoming concrete. They have to do with possibilities of applied arts and entrepreneurship… it’s hard to say anything about theatre. In addition to corona, the crash of municipal economy creates pressure for theatre and everything else supported via public funding. Economic pressure doesn’t exactly help. On the other hand, I doubt it helps anyone… Then again, domestic tourism and “nearby entertainment” might grow to flourish and see a new heyday after corona, and that brings new possibilities to theatre… let’s say that hopefully I’ve graduated by then and got some kind of livelihood, from this job or something else. If it’s from something else, I’m especially interested in using artistic methods in developing businesses. Professionally and as an individual I could focus on deepening my skills after gaining new knowledge. This life is a wave-like movement.

Oulu2026? As not originally from Oulu, I think Oulu’s strenght is in being a marvelous frontier between city and country. Oulu is an extremely global city, but has a rural countryside with its own traditions right next to it. And it’s a good thing. That mixture has its strenghts and things setting it apart from everything else. Of course there’s a problem in that most people don’t value it and some people on the other hand think of it all as something holy, taking pride of their home way too far. Juxtaposition and the kind of hard, critical comparison, “we should be like that / those others are like that” is pretty useless. Regions are different and have different values; if they didn’t, they’d all be the same region. I think our differences should be celebrated, and we should be proud of them, but they aren’t a basis for universal moral.

The current Capital of Culture programme is okay in principle. All this project-hassle makes the programme a bit distant from a person like me, a person focusing on action and producing content.

I kind of miss culture being not only producing phenomena and experiences. I miss trying to get people to understand their culture and its influence on thoughts and actions. I think of culture as something else than just arts and crafts, aesthetics, producing experiences, or a tool for propaganda. Culture is something into which we are all born in, and one might not realise it unless you monitor it. That’s why cultural services are needed: as a mirror for what we are, and as a tool for development. Alongside that, there’s of course aesthetics and escapism, skills, design, and art care. Maybe the whole idea of culture should be given some ventilation and aim it more so everyone understood that no one’s safe from culture. Culture is in everyone – everything is culture.

Should Oulu be given the title of European Capital of Culture 2026, I’d like to congratulate us all with these words: “We managed to create a society in which everyone can be proud of and critical of their culture. This is a good starting point for building bridges.”