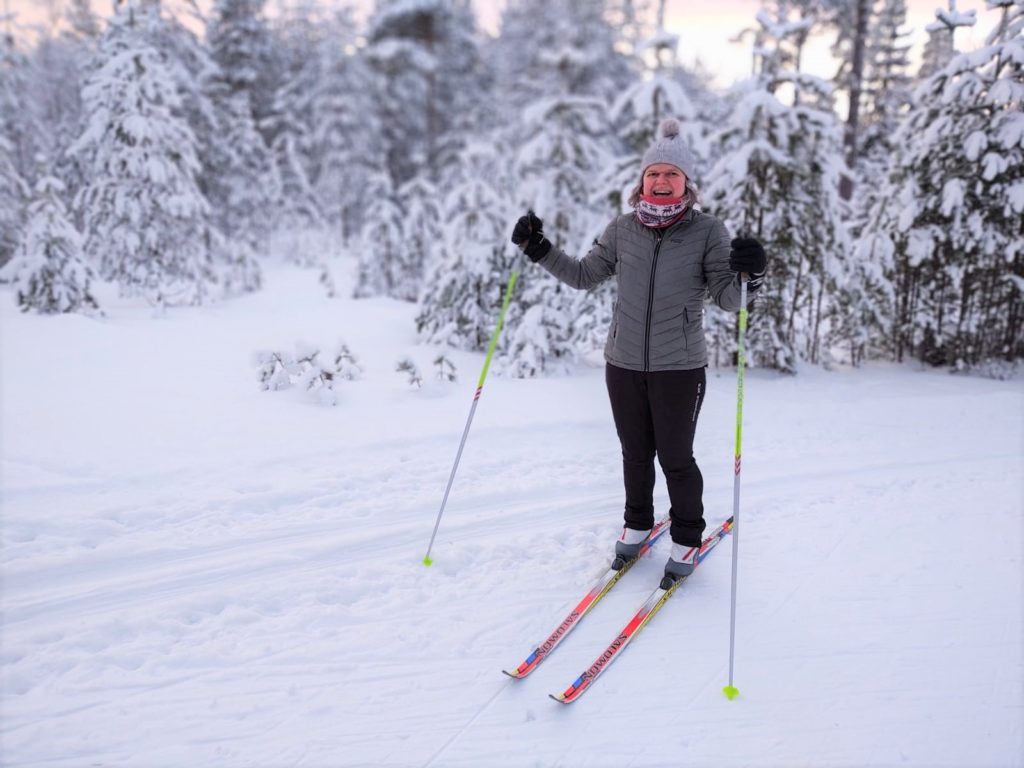 When I decided to move to Oulu from London without my family for a year, I made a deal with my children that we wouldn’t be away from each other for more than 50% of the time.

That was before any of us heard about Covid19. We had no idea that flying between Oulu and London would not be quite so easy after March 2020. Still, despite the restrictions, we managed to stick to the 50% deal all the way to November.  My family could come and stay with me in Oulu on a regular basis because even in Covid times, close relatives of a person living in Finland were allowed to travel without any hassle.

That all changed with the new version of the virus, perfectly timed to make an appearance in England just before Christmas. The border was shut with immediate effect and there have been no flights from the UK to Helsinki since Dec 19.

With flights cancelled, my family couldn’t come to Oulu for Christmas. I could have probably gone to London. But if I’d done that, I would now be trapped there for weeks, or months. We thought it was best if I stayed in Finland and postpone our family Christmas to whenever we can travel again.

It’s moments like this when you realise how much we invest in Christmas emotionally. When the decision to stay apart sank in, we were all heartbroken. But what can you do when life throws lemons at you? The only sensible thing is to adapt. That’s how I ended up on a train to Turku to spend Christmas with a Finnish family I’ve known for over 35 years.

Eeva-Maria was my pen-friend when I was in primary school in communist Hungary.  A few years later she came to Budapest on an inter-rail trip and stayed in my family house for a few days. I came to Turku when I was a student to visit her. Another few years later she and her parents and siblings all drove from Turku to Hungary to attend my wedding. I have lots of friends in Oulu but I haven’t got this kind of history with anyone here. So Turku was an obvious choice: they are my Finnish family.

There I was, running in a snow-less forest in Kaarina, contemplating how, just three days earlier, I had no idea I would be there for Christmas. It was a strange thought but it passed quickly: I had to concentrate on not getting lost and risk being late for the start of the festivities. I was under firm instructions to get back home in time for the Joulurauha announcement.

I think traditions are important and they’re mostly reassuring: they connect you with previous generations and create shared experiences. By the time I sat down in front of the TV to watch the declaration of Christmas peace in Turku’s great square, all was well with the world.  A male choir and a military brass band performing Luther’s Battle Hymn of the Reformation was a bit unexpected but nevertheless uplifting addition to my start-of-Christmas experience.

But then came riisipuuro, It gave me a shock because it looked exactly like a sweet rice pudding, something I often ate as a child. But riisipuuro was salty! Somehow I ended up with a very large pile of it on my plate of which, I’m ashamed to report, I managed to eat only one very small spoonful. I decided that it was probably a south Finland aberration but upon my return to Oulu, I found out that it was also on everybody’s Christmas table here. What can I say? Maybe try, just once, making it with milk, honey, cream and vanilla sugar and drop in a few raisins?

The rest of Christmas food was great: a huge ham and salmon were brilliant centrepieces and I had a decent portion of each laatikko as well, unlike most other members of the family who I noticed were decidedly less enthusiastic. After my riisipuuro fiasco, I thought I’d better not comment on that. We then blissfully slipped into an eat-drink-chill-repeat routine that lasted for the better part of the next three days, all very similar to how it goes in England and Hungary. We exchanged presents, played a few games and I spent a lot of time trying to fend off the family’s huge Labrador who developed a keen interest in me.  We laughed and cried – the latter mostly when I was speaking Finnish – and had a blissfully relaxing time with wonderful people who rallied around me and gave me a brilliant Christmas. I’m so lucky  to have them in my life.

I’m now back in Oulu, working on four films in January. I’ve also stepped up my exercise regime in a big way. I bought a pair of skis and boots from tori.fi that fit me perfectly and I ski 5K every morning in winter wonderland. I’m improving fast and I find the whole experience of a having a new harrastus totally exhilarating. On top of that, I run 5K in the evening. I invested in a pair of running shoes with metal studs that feel safe even on ice. So I’ve effectively doubled up on exercise in the last two weeks and I feel super fit and healthy. It’s so easy: conditions to ski and run are perfect. Oulu is breathtakingly beautiful covered with tons of fresh snow. The skiing and running tracks are all lit and perfectly maintained. I enjoy the sight and feel of the city these days so much that I forget that I exercise. And if all goes well, my skis will even get a layer of fresh wax next week thanks to a friend who apparently knows what he’s doing. It has to be Oulu Tervahiihto next.