As we’re approaching Christmas and the end of 2020, it’s time to take stock. 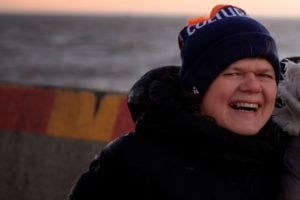 It’s been an exceptional year, with a global pandemic messing with all of our lives in a big way.  But here in Oulu, Covid19 has caused a lot less disruption and pain than elsewhere.

To me, moving from London to Oulu last summer was certainly the best decision in 2020. Not just because of the coronavirus situation, but also for general wellbeing.

I love that Oulu still has four seasons. Most of Europe has lost four seasons to climate change. In London you can even sometimes wear the same clothes in June and January.  In Budapest, they now have a hot summer and a cold winter and nothing in between: the temperature jumps from minus 5 in the middle of March to plus 25 a week later.  It appears that even southern Finland is losing winter. Last year’s temperatures in Helsinki were the same as London’s, with lots of rain rather than snow.

I think there’s something profoundly reassuring about having four seasons. Last June we had gorgeous summer weather here. I had the best tan in many years thanks to my running-cycling-swimming routine while on holiday in Ii. In September and early October I saw the most beautiful colours in Oulu, trees with incredibly bright red and yellow leaves. I picked lingonberries and went canoeing on Oulujoki in crisp autumn air and watched wonderful sunsets all the way to mid-November.  And now we have snow and ice and I can’t get enough of it. Winter is my favourite season and I’m taking full advantage: I’ve skied in the Hiironen tracks and gone for short swims in the canal in Toppilansaari after breaking some ice. That you can experience all of this in the middle of a city of 200,000 is incredible. Pure nature and all the services that come as standard in any big city, all in one place. We’re so lucky to have this mix. To me it provides a much better quality of life than any other place I’ve lived before.

And then there’s cycling. I haven’t got a car in Oulu: I go everywhere by bike. The network of bike paths is so extensive and maintenance is so good that I don’t need a car. I’m not alone: over 20% of all journeys in Oulu are made by bike which is twice as many as the Finnish average. And 50% of Oulu’s residents cycle in the winter. My friends outside Nordic countries can’t believe their eyes when they see my photos. “Astonishing.” “How on earth is this possible?” – are typical reactions.

Oulu is perfect for cycling because of its size, and the infrastructure to support cycling is excellent. Bike paths are cleared of snow before roads – a measure that results in more gender-equal travel and a reduction in the overall number of accidents The world could learn so much from Oulu about how to make cycling and walking the preferred option for moving around in a medium-sized city.

I don’t cycle in London because the majority of cycle paths are not segregated: you ride with cars around you. It’s not safe. In Oulu, it is. You hardly ever cross a busy road and when you do, there’s traffic lights with sensors to help cyclists pass without having to wait. My daily journeys are a world apart from London’s. They’re now stress-free and hugely enjoyable: no driving, no hassle to find a parking space and no crowded, sweaty hours on the underground. It’s a huge bonus for my wellbeing: cycling in a forest for an hour a day does wonders to mental health.

The only thing I’m missing is meeting people face-to-face. But that’s the reality of 2020:  the chequered laptop screens of Zoom and Teams, and the face masks on rare occasions when I can interview somebody in person. There’s a good reason why we have to put up with them and hopefully not for long now.

Social distancing and the recommendation to work from home have seriously hampered my efforts to learn Finnish. I’m nowhere near where I thought I would be after living in Finland for six months. But it’s not a complete failure.

I hope that with vaccinations rolled out, the worst of the pandemic will be soon behind us and I can make serious progress with my Finnish through meeting and interacting with more people. Here’s to a virus-free 2021, in fairness, security and freedom for all of us.