Why I’ve moved to Oulu? 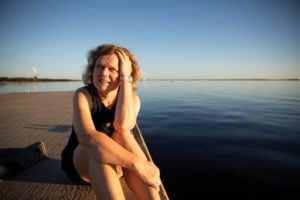 moved to London from Budapest when I got my first job with BBC News 23 years ago. I was thrilled. Living in London gave my kids fantastic opportunities: they grew up bilingual in a liberal, open, multi-cultural environment. I also loved my job: I started as a radio producer but quickly became multi-skilled. I did stints in TV and online news and also social media. I learnt a lot, working with the best.

But five or six years ago I noticed a change that started to annoy me. All of a sudden there were a lot more people in London. Public transport had got a lot busier and my journeys to the BBC newsroom in central London became a pain. The underground was unbearable in the rush hour. I would regularly spend half an hour squashed between strangers, often under somebody’s armpit. But it was not just public transport: pubs, restaurants, parks, swimming pools, entertainment venues all became noticeably busier. I had to start booking tables for Sunday roasts in pubs where I would have just spontaneously walked in a few years earlier. Life was changing in London: it became a lot more congested and much less fun.

I started coming to Finland regularly in 2017: I was making a film about the basic income experiment. It was an observational TV documentary with four people receiving basic income: two in Helsinki, one in Oulu and one in Kurikka. I love making films with ordinary people talking about their lives and this was exactly that: I came to interview my four case studies every six months during the two-year pilot to see what impact – if any – basic income had on their lives.

Every time I came to Finland I noticed how much happier I was here than in London. There was much more space, public transport worked a lot better and people were extremely pragmatic and helpful. They were also a lot less stressed. I felt more free and more creative. I made friends and I picked up lots of new story ideas. I began to realize how undercovered Finland was in the international media. My contacts were telling me about fascinating stories about climate change, the future of energy, water sustainability, addressing problems in an ageing society – issues that affect everybody around the world.

I kept coming back to Finland to produce more stories. I was going from strength to strength: the short video versions of my films that we posted on social media attracted millions of views, confirming that there was a huge interest in Finnish stories among a global audience. And when I was back in the newsroom in London, many of my colleagues said: “Hey, what are you doing here? I thought you’d moved to Finland.” And I started thinking: “Why not?”

I spent a total of almost four months in Finland in 2019, growing more and more convinced that I wanted to live here for a while. So I couldn’t be happier when I found an opportunity to come to Oulu to support the 2026 European capital of culture bid.

Oulu and the surrounding regions have some fantastic stories and I can’t wait to start filming them. I’m looking forward to working here until next June and I very much hope Oulu’s bid will be successful. Helping to make that happen is my main goal for the next ten months.

My second big goal is personal: I want to learn Finnish. To be realistic, chances of achieving that goal are significantly lower than Oulu becoming EU capital of culture.

I’ve been meaning to learn Finnish for at least a year but I’m making painfully slow progress despite putting quite a lot of effort into it. This is very frustrating because I normally find it easy to learn languages. I speak four very well and I’m reasonably fluent in another two. But not Finnish: I often manage to hold a conversation for a few minutes, only to be completely thrown by something pretty basic, at which point I have to admit that I don’t understand. Then the Finn I’m speaking to realises that I’m not a Finn, they will switch to English and that’s the end of the conversation in Finnish.

One problem is speed: more often than not, when they repeat the sentence that I didn’t understand nice and slow, I’ll realise that I know every word

Another problem is that I know very little grammar so I often know most of the words that I hear but I still don’t get the meaning. I imagine this is what must feel like being dyslexic. The one benefit is that If I ever do a story about dyslexia, I think I’ll have a lot clearer understanding of the condition, thanks to my struggle with Finnish.

I think I’ll only every learn to speak Finnish if I find more friends who don’t speak English at all which is fairly hopeless. So far I’ve only met one of these rare characters. He’s very keen to speak to me but he’s pretty rubbish at adjusting his Finnish to my level. For instance, his cheery: “Soitaa minulle kahden viikkoa päästä, joohan!” left me wondering who Johann is and why exactly I needed to call him. All this on the phone, obviously. So so confusing.

If you know someone in Oulu who

Please give me a shout, I’d love to meet them.