We Support Oulu2026: Portrait of Leverkusen 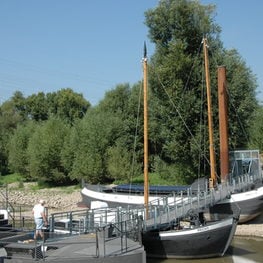 Leverkusen: Less than one hundred years old but known worldwide

Leverkusen is young, much younger than most other towns in Germany –the town became only 90 years in 2020: officially founded in 1930, but the set up for the later town already took place in 1860 with pharmacist Dr. Carl Leverkus establishing a company for the colour ultramarine. Being self-confident he named the growing surrounding housing estate with houses for the workers and social institutions close to his company „Leverkusen“. This name was taken over also by the company, which from 1891 on in a short period raised up to become one of the biggest and modern chemical plants in the world. Leverkusen then developed very fast from a rural town on the Rhine to a Global Player. This story still has a deep influence.

Coming from one of the motorways or over the bridge across the river Rhine you will nowadays see a large amont of industry buildings. Identified until today by the brand BAYER. Since 1912 their head office is located in Leverkusen and runs a worldwide acitive group from here. In the later developed CHEMPARK the Currenta GmbH markets suitable commercial properties for companies like Lanxess AG, Covestro AG, Momentive Performance Materials, Kronos Titan GmbH and many more. http://www.chempark.de/ .

Being the location of the faculty of applied sciences of the Technical University of Cologne since 2010/11 the faculty will move from the CHEMPARK to its own new campus area in 2021. It will offer study places for around 1000 students. https://www.neue-bahnstadt-opladen.de/ostseite/hochschulcampus/ .
But also the school infrastructure has its own profile: 24 primary schools, six secondary schools, five highschools, one elite school of sports, four vocational colleges, two comprehensive schools and three special schools offer best education.

The soccer players of Bayer 04 Leverkusen are well known and successful in the first German soccer league and also in the European Champions League. Many soccer stars played and play here. Also in athletics Leverkusen shows a lot of talent.

Cultural highlight of each year are the Leverkusen Jazzdays with international stars presenting their music and attract an audience from near and far away. Concerts are played in the cultural center as well as in different clubs ofthe town. The cultural center of Leverkusen, the Forum, invites up to 1.000 visitors also to theatre performances. Orchestras, dance companies, ensembles and different international artists like to come here. There is also space for exhibitions, fairs, meetings and events of companies, organisations and societies https://www.kulturstadtlev.de/home/ . Bayer also offers a wide cultural program https://www.kultur.bayer.de/ .
The local Museum Morsbroich ist he first museum in Northrhine-Westphalia, that shows modern art. Parallel to its exhibitions this museum offers an impressive collection of about 300 artworks of painting and sculpture as well as about 2.300 paperworks.
This special museum is located in an extensive park area. http://www.museum-morsbroich.de

Concerning Leverkusen´s long lasting friendly relationship with Oulu since 1968 it is not at least important to mention, that you will find over here a lake named after Oulu and also the street „Oulustrasse“ with a traffic light for pedestrians showing the figure of „Toripolliisi“ in the red and the green spot on it.